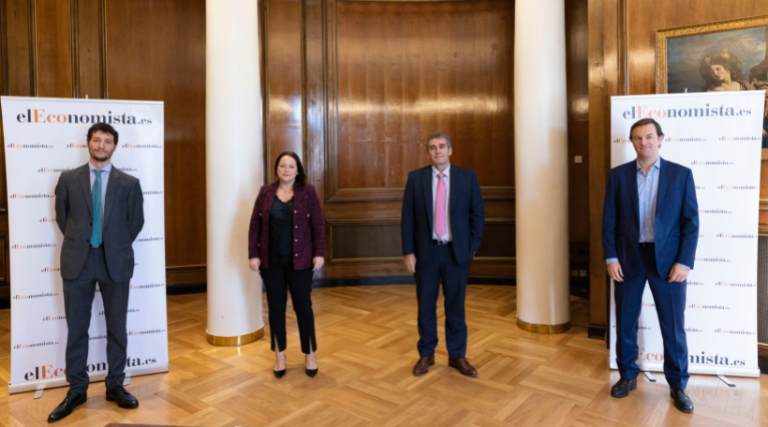 There are routine tasks in any job that take up time that often slow down and detract value from other parts of a company's activity. These are everyday processes that have to be carried out in order for the rest of the work to move forward, yet their execution lacks visibility because they are accepted as something that has to be done, and this takes place in large and small companies alike, irrespective of the sector.

With the help of technology, these repetitive tasks are increasingly being resolved with greater diligence, to the extent that some processes are now fully automated by a robot that is able to reduce to minutes what used to take days of work.

To analyse a specific case and see the impact of this technology on the relationship between an investment funds management firm and its depositary, elEconomista has organised an Observatory, in collaboration with Cecabank. At present, the depositary bank manages more than €205 billion in funds belonging to various clients, which means that thousands of documents and accreditations are written, exchanged and updated on a very regular basis.

'Broadly speaking, robotic process automation (RPA) goes a step further than an Excel "macro" that was just a set of actions programmed into an application. Now the machine is able to open a mail document, extract data, fill in new forms and send or store them. In other words, it is able to interact with several applications at the same time as an employee would. The algorithm already existed, now it is being implemented in these companies', explained Esteban Morillo, associate director of RPA at Servinform and responsible for the process at Cecabank.

Cecabank understands that automating part of its activity was a logical step in the evolution of the bank and took the decision to start the process in 2017. However, technological progress was not the only thing pursued. For Aurora Cuadros, Cecabank's Corporate Director of Operational Services, 'robotisation has to add value, we wanted RPA to be part of the business and to replicate human activity'. Cecabank thus explains that human staff only have to supervise the task now performed by a machine and can devote their time to other tasks and improve the efficiency of the entire institution.

'We have reduced the risks associated with repetitive tasks'.

On the other side of the depositary is the fund management firm which, in this case study, is CaixaBank. Lluís de Torres, Director of Operations at CaixaBank Asset Management SGIIC, acknowledges that the process 'has improved after identifying which tasks could be automated'. In his opinion, RPA is worthwhile if we take into account the costs of implementing this process and the benefits once it is up and running, as 'the risks associated with managing more than 200 investment funds with close to €80 billion are high', said the head of CaixaBank.

The usual problems faced in this type of task were that, by repeating and completing hundreds of documents in a single day, a human worker could make a critical mistake, 'not through lack of professionalism, but through lack of attention after replicating the same process in an automated manner'. 'The robot manages all the documents and sends the information to the Spanish Tax Agency on your behalf', said Lluís de Torres by way of example.

Although the administrative tasks may be similar in any business, the activity involving a fund management firm and a depositary requires a specific process to automate the relationship between the two businesses. This is why implementing robotisation in such a company requires planning.

'It is rare for a company to want to undertake abrupt changes in the way it works, just as you cannot automate everything all at once', said the expert Esteban Morillo. In his experience, it is best to first study the tasks that can be automated and then design the code, which will be the route that will guide the machine so that it can 'learn' and 'implement' on its own.

'We are in a sector that, although it takes advantage of technology, has many activities that are still done manually', explained Aurora Cuadros. For this reason, she adds that, in a phase of customer acquisition, Cecabank is trying to ensure that the fund management firms it works with introduce robotisation so that exchanges between them are safer, more dynamic and with fewer risk factors. Now, fund management firms are already demanding more automation as Cecabank has increased its business.

The automated human factor has another added risk for the head of CaixaBank, Lluís de Torres, in addition to the errors that can occur when hundreds of accreditations are processed by hand. 'When a specific activity is assigned to an employee and that employee is absent due to sick leave or retirement, the whole process slows down because no one knows that process as well as that employee and it generates a dependency because the employee has made that task their own and it cannot be understood without them', adds de Torres.

With the implementation of a robotised process, in his experience, the control of activities is shifted from one person to a department or work group within the company.

On the other hand, the 'arrival of a robot' in the company generates resistance on the part of staff, who see it as a threat, that a machine could replace the tasks undertaken by the employee and eventually result in their departure from the company. 'When you tell your department that you are considering robotising 90% of the work that is currently done by one person, it generates resistance and unease', according to CaixaBank.

However, once the pedagogy of what the arrival of RPA means for the day-to-day operations of the department and the tasks that the machine is going to take on, mostly of an administrative nature, 'resistance turns into benefits to the point that the automation of these repetitive tasks becomes self-motivating for staff and enhances creativity thanks to having a clearer head', says Aurora Cuadros. 'You have to consider that a person used to spend four hours "marking" data one document after the other, and practically all of them the same'. Now that person spends those hours on another value-added activity such as being proactive with our clients' needs', says Cecabank's Head of Operational Services.

For the past five years, the added value of a depositary has been based on investing more time in its clients and offering service improvements rather than only performing the more administrative tasks inherent to its business. 'It has been the way to scale our business and improve efficiency', notes Aurora.

'Thus, the tasks within Cecabank's teams have been restructured and this allows us to make tasks more flexible and enrich processes', adds Cuadros, who understands that all depositaries are applying RPA in their businesses and now the differentiation and added value lies in knowing how to redirect the human capital that previously dedicated most of its time to "chopping" data towards greater dedication to clients.

Being the boss of a robot

For the associate director of RPA at Servinform, most of the learning that has to take place in a company that is going to automate a business process is learning to manage teams where the machine is part of the workforce.

'Considering that we ourselves are responsible for the robot's maintenance, the human employee only has to monitor the errors reported by the robot in its process and, if it needs a code correction, notify us', says Esteban Morillo, who jokes that 'if the robot makes a mistake, it is because the person who has defined it has made a mistake'. 'It's hard to adapt at first because you have a robot working with you but you don't see where it is and, for many of our clients, they don't even know it exists', says Cecabank's Director of Operational Services. In the Securities Services area, it is therefore very important for department heads to manage teams of people and robots.

'Robotisation in excess of 70% can be achieved'.

Similarly, Servinform understands that there is no correct percentage of how much a business should be robotised. For a sector that is highly dependent on administrative or bureaucratic processes, high automation rates of over 70 per cent can be achieved, says Morillo. The example of fund management firms or depositories is not an area that lends itself to high levels of automation.

The challenge in this sector is to detect the key areas that, with process automation, improve the value of your activity. 'The possibilities are numerous, especially with Big Data and with an increasingly large volume of information that needs to be managed within our fund management firm', said the CaixaBank manager, who does not rule out further collaboration with Cecabank in the field of robotisation in the coming months. 'What we need to examine is what processes can be automated to improve the added value of the business', said de Torres.

The future of RPA

When the speakers participating in this observatory address the future prospects of robotisation in their respective businesses, the concept of 'hyper-automation' is brought to the table. This process consists of taking the next step after the robotisation of various tasks. 'On the one hand, more tasks than just RPA are collected, such as managing, reading, storing and responding to data or information. We would be talking about adding automatic machine learning to the whole process, and endowing the system with artificial intelligence that makes certain decisions without the need for human intervention', explained Morillo.

'Hyper-automation' would start to work in parallel to the activity performed by the employee. In this manner, the machine learns what to do as it observes what the person is doing. After several repetitions, the machine 'has understood the process and begins to make suggestions to the employee as to how the robot would do it to be more efficient', said Servinform expert Esteban Morillo. 'When the robot suggests an operation with a certainty of efficiency in excess of 95%, the machine at that point knows the process and where it can improve on its own', Servinform points out.

The ultimate goal is that the automated process, with certain artificial intelligence, develop its own ideas or make its own decisions to execute the process without the permission or tutelage of a human being.